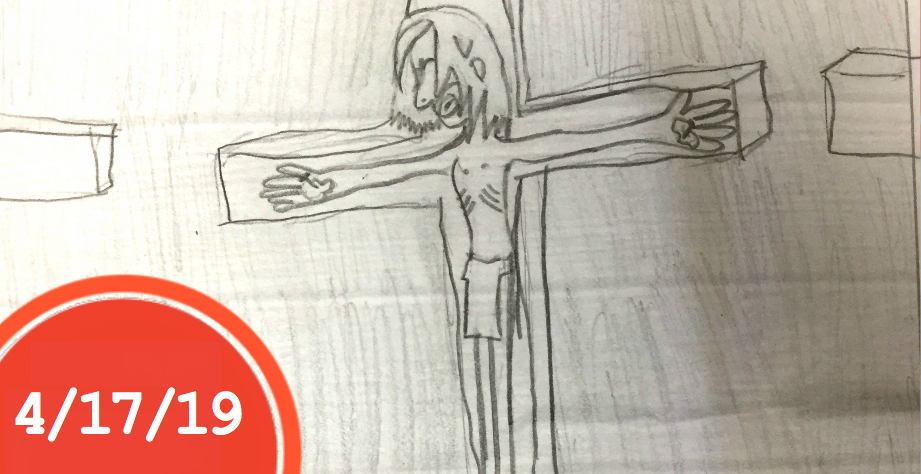 God made him who had no sin to be sin for us, so that in him we might become the righteousness of God. (2 Corinthians 5:21)

At the core of the “good news” of Jesus Christ, there is this fantastic exchange where Jesus takes on our sin, and we get his righteousness.

If you have been a churchgoer for a considerable length of time, this is a teaching you have likely heard dozens, if not hundreds, if not thousands of times.

But here’s the thing. While we can believe this to be true in our minds, it’s very easy for this teaching, as profound and beautiful as it is, to stay in our heads and not penetrate the soul where it actually can transform the way we live on a moment-by-moment basis.

For one thing, to a lot of people, this whole message of salvation just doesn’t make a whole lot of sense. Even if a person intellectually assents to this belief and begins following Jesus, there can still be nagging questions.

“Why did Jesus have to die for me to be saved? How does his death save me?”

Many have trouble connecting the dots. And for some people, because they can’t understand what happened on the cross, it makes it harder for the beauty of Calvary to get on the inside and feel like a real thing.

Part of the problem is that we tend to frame the whole topic of salvation with a “court of law” analogy.

This is how I was taught by well-meaning, but misguided Sunday School teachers when I was kid. The teaching went something like this. God is sort of the Judge with his gavel in hand, and we’re the defendants. And the Judge sternly pronounces us guilty and condemned, but then Jesus is our lawyer and he says, “No, Dad, Judge, don’t punish them. Punish me instead.” And somehow that acquits us and gets us off the hook.

And that’s how a lot of people have been taught to think about the cross. The trouble is, it messes around with your head if you start thinking about it too much. It raises a whole lot of questions.

For example. Does God have sort of a split personality? Is God the Father an angry, vindictive judge who would just as soon send us to hell? But then Jesus comes and says, “No, dad, punish me instead”? Is this how the trinity works?

Rather than seeing salvation primarily through a “court of law” analogy, we should see it in terms of a covenant of love, a marriage-like covenant. Something like this…

From the beginning, God created humanity so that he would have a radiant bride to whom he could join himself in loving relationship.

His plan was to court humanity for a little while, and then there would come a point when he would enter into humanity and join himself to us. The incarnation was the goal from the beginning.

And yet God was willing to do that. In the person of Jesus Christ, he entered not only into our humanity (which was the plan all along), but on the cross he entered into our sin and rebellion, taking it upon himself, and owning it for himself, in order to redeem us out of it.

It’s not that different from a normal marriage. When two people get married everything that belongs to that other person, for better or for worse, becomes yours. When you say “I do,” you don’t get to pick and choose to marry the good parts of the person and leave the other stuff at the door. When two become one flesh, now every psychological, emotional, and physical issue that person has is now yours. You just solified yourself with them. You bear their wounds, you bear their sins. That’s part of what the love covenant is all about.

When Carrie married me she didn’t just marry the funny, romantic, intelligent, and charismatic guy (heh). She married a guy with a lot of baggage too. And to marry Ryan was to marry the whole Ryan, not just the good parts of Ryan but the history of Ryan. All the wounds and the scars that are there. And so when she joined herself to me she joined herself to some of the scars of my past. But saying “I do” meant that she commits to loving me even in the midst of all of that baggage. In fact that’s one of the ways that God uses her to free me from the baggage.

Spouses always bear one another’s sins and wounds, but when we commit to loving unconditionally in the midst of that, it’s one of the ways we can heal from our scars and wounds and get freed from our baggage. When you’re loved unconditionally in the midst of your baggage, you learn that you are not your baggage. Your baggage doesn’t define you. You’ve got a self that is lovable apart from the baggage and it’s part of what frees you to put down that baggage and begin to move forward.

Husbands, love your wives, just as Christ loved the church and gave himself up for her 26 to make her holy, cleansing her by the washing with water through the word… (Ephesians 5:25-26)

For this reason a man will leave his father and mother and be united to his wife, and the two will become one flesh.”  32 This is a profound mystery—but I am talking about Christ and the church. (Ephesians 5:31-32)

There’s something like a marriage one-flesh relationship that Christ has with his bride. And the blessings go both ways. He blesses us and we bless him. “For the joy set before him, he endured the suffering of the cross” (Heb. 12:2). We delight his heart. He gets something out of this. The blessings go both ways. But unlike human marriages where the sin and the baggage goes both ways, in this case, the baggage only goes one way. Because he doesn’t have any baggage to give us. And this is why it’s such a great exchange.

God, in his unfathomable love, joins himself to our sin that we can now be joined to his righteousness.

He joins himself to our bondage to Satan that we might then be joined to his freedom.

He dives into our hell that we can eternally participate in his heaven.

(The illustration in the title image was made by 4th grader Emily Hanks during one of my recent sermons.)